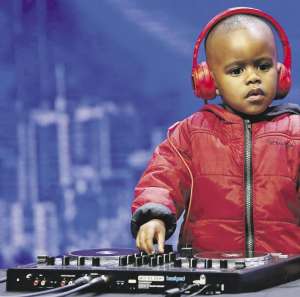 DJ Arch Jnr has been called a musical genius by those in the music industry.

On Sunday he was the youngest act on e.tv’s reality show, SA’s Got Talent to receive the golden buzzer from DJ Fresh, who is one of the judges, sending him straight to the semi-finals.

DJ Arch Jnr had the whole theatre on its feet with his song selection during his audition performance.

No one knows how he is able to grasp the art of deejaying as many people older than him find it difficult.

His father, Glen Hlongwane, told SunBuzz that his son continues to surprise him every day.

These days this DJ from Alexandra township travels the world playing on some of the biggest stages.

“We have just come back from Namibia and Botswana where AJ was booked to perform,” said Glen.

“When he is at home, we deal with a normal three-year-old who still throws tantrums and behaves like a child,” said the proud dad.

Glen, who coaches the national gymnastic team, said his duty was to guide his son and make sure that he takes the right path.

“My son is still young and does not understand a lot of things that are happening.

“I know that right now I am his voice and guide but when he is older, he will make his own choices as to what sort of career path he wants to take.”

He said his son loves music and that is why he is a DJ.

“People think I am a DJ and that is why AJ ended up becoming a DJ, but I am just a guy who loves music and just happens to have deejaying equipment.